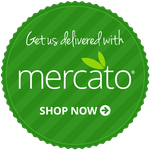 Seaweeds, specialty food items from all around the world, healthy rice and noodle dishes